Travel . Tours . Adventure
The Portuguese Way is one of the most popular Caminos to Santiago after the French Way. It starts in Lisbon then continues north via Porto then Ponte de Lima to the Portuguese border at Valença do Minho. Then after crossing the international bridge over the River Miño the Camino enters the Galician border town of Tui. However, there is a relatively new, alternative route known as the Portuguese Coastal Way which is becoming really popular with pilgrims. This starts in Porto but follows closely the Northern Portuguese and Galician coast until it meets the Portuguese Way at Redondela. The Portuguese Way then continues to Santiago but it is also has another relatively new variation just after leaving Pontevedra called the Spiritual way which rejoins the traditional route at Pontecesures just before Padrón. 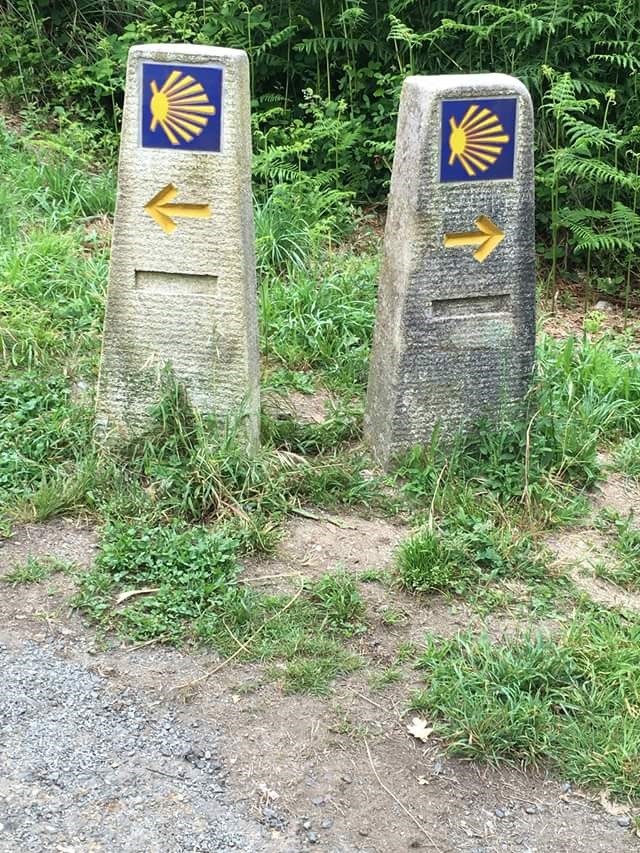 The following maps show all of these routes. 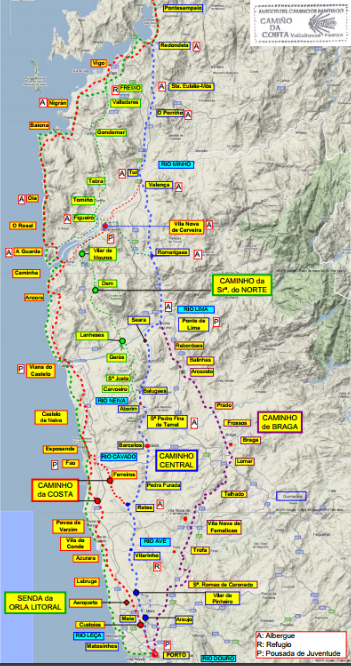 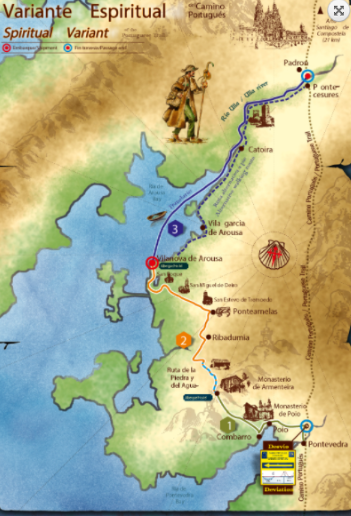 Most pilgrims walk at least 100 kms so they can get their Compostela from the Pilgrim’s Office in Santiago, certifying they have walked this (minimum 200 kms if you are a cyclist). That can also be done within a weeks walking if you start from Baiona to Santiago (about 130 km) or alternatively start in Tui (117 km). That includes doing the variant, the Spiritual Route which shouldn’t take up any more time compared with the traditional route. But you can also pick and choose so it’s no problem starting somewhere else so long as you get your Credential stamped. In less than 2 weeks you can walk the entire way from Porto to Santiago either along the Coastal Way or along the traditional Portuguese Way and experience the joys of two very different countries with different gastronomies.We’ve picked some of the highlights to look out for when doing these various routes within Galicia, the last 100 km or so in 7 days or less. The Coastal Way which starts in Baiona or further down the coast at the border town of A Guarda or in between the two at Oia is increasingly popular and is our favourite option. It’s the sheer beauty of the coastal scenery watching the wild Atlantic Ocean on one side passing amazing sights like the Celtic hilltop settlement of Monte Santa Tecla ; Oia Monastery which almost rises out of the sea ; the lighthouse at Cabo Silleiro or the ancient fortress at Baiona. On the other side are the backdrop of spectacular, green mountains. In the distance as you approach Baiona you can see the North Atlantic Islands, arguably Spain’s most important National Park. Then there’s the architecture : the granite stone crosses, mansion houses (Pazos), grain stores (horreos), fountains (fuentes) and statues/images of Saint James.

The Monastery of Oia
The resort town of Baiona has plenty of accommodation options from its Parador, one of the very finest in all of Spain to budget hotels. It also has lots of bars/restaurants serving the local fishing catch and the local, abariño white wines increasingly so popular at an international level. So no surprises that it’s a popular destination with the Spanish and we know how much they like good food and drink! Baiona also has a long history associated with the Camino. It’s old hospital (Sancti Spiritus) was built in the 16th century to look after pilgrims and the poor. Santa María Church which dates back to the 13th century has a statue of Saint James the Apostle (Santiago) to the left of the altarpiece as well as the scallop shell, the iconic symbol of the Camino. Santiago on his horse can be seen in the 17th Century Santa Liberata Church which dates back to 1595. And the 15th century Santísima Trinidade Cross (the only covered cross in Galicia!) directly on the Camino has an image of Santiago too carved at the base of the cross. At Ramallosa pilgrims cross its beautiful 13th century roman bridge. 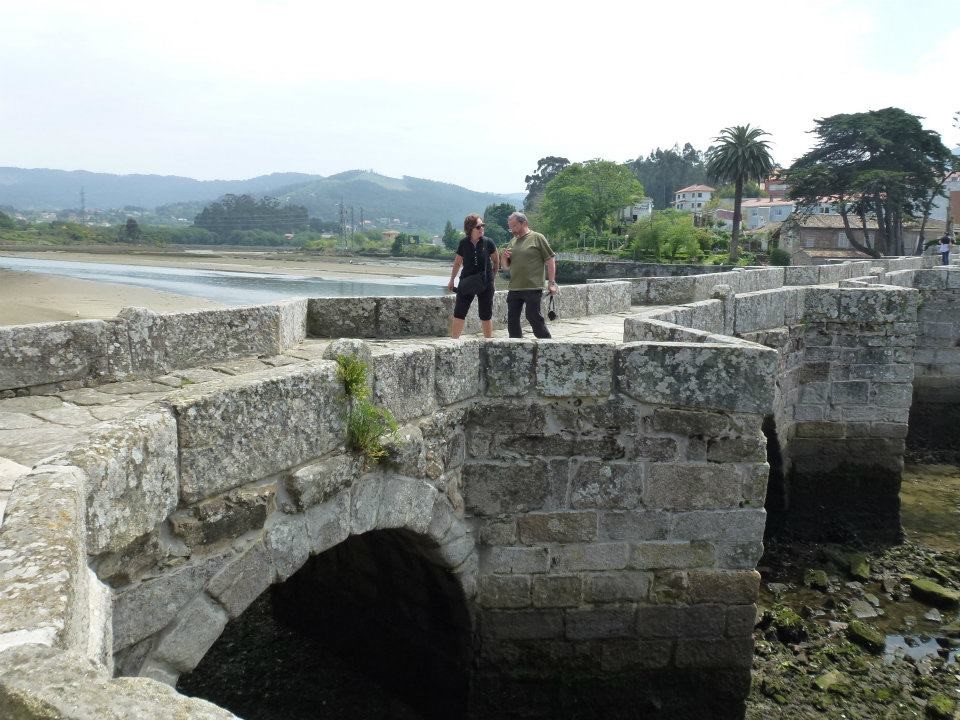 The Camino passes through the city of Vigo which has plenty of things to see including its hilltop fortress and park at O Castro, its Old Town and nice squares like Plaza Compostela and its Port area with views of the estuary, the mussel beds and Cies Islands,a candidate UNESCO world heritage area ! The stage to Redondela is also beautiful and is known as the water route as it passes waterfalls and nice woodland with breathtaking views looking out towards the Vigo estuary from above. Then from Redondela where the two caminos meet there are even more pilgrims and albergues, bars etc, The Camino passes the well preserved Old Town of Pontevedra probably the best in Galicia after Santiago, full of medieval,noble houses and beautiful monuments like the scallop shaped Santuario de la Virgen Peregrina, be sure to get your stamp there.

Shortly after there’s an option to do a few different stages on the relatively new Spiritual Way. This too is a beautiful walk via Combarro with its horreos that seem to almost rise out of the sea. It goes past monasteries and descending,a steep gorge then the Salnes valley famous for its albariño vineyards after passing more religious sights you arrive in Vilanova de Arousa Then a real highlight the boat trip up the River Ulla passing Catoira famous for its Viking Festival and the remains of its West Tower fortifications, as far as Pontecesures next to Padrón where the Camino meets the traditional Portuguese Way again.

Otherwise the majority of pilgrims continue from Pontevedra to Caldas de Reis known for its thermal spas. After more beautiful and at places challenging woodland and countryside walking you arrive in Padrón famous for its delicious green peppers. It’s at the River Sar where Saint James disciples disembarked with his remains in 42AD so it’s the most symbolic place on the Camino after Santiago. There’s also Santiago Church which has the stone the boat was moored to carrying Santiago’s body. And it’s at Santa Maria Church in Iria Flavia that the Bishop of Ira unveiled the tomb of Santiago in 813. After passing Pazo Faramello (worth a visit by appointment only) not long after you start climbing gradually and after Milladoiro at Agro dos Monteiros you get your first glimpse of the bell towers of Santiago. The last 7 km are not easy but spirits lift when you pass Alameda Park (climbing up into the gardens presents you with the best views of the Cathedral from an amazing viewpoint). You then enter the Old Town at Porta Faxeira which leads into Rúa do Franco which is full of bars,restaurants and gift shops until you reach Plaza Obradoiro and the majestic Santiago de Compostela Cathedral. A thoroughly amazing journey of discovery and one of life’s magical experiences.