Although wine in Galicia has a history tracing back to medieval times when the English would sail up the river Mino to buy wine from the area, it is only in the last 20 years that Galician wine has claimed its place in the world of wine. 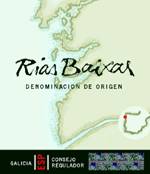 The Rias Baixas D.O. made up of five subzones, three of them are located in the province of Pontevedra province, which makes up Galicia’s Southwestern coast. Val do Salnes, whose centre is in the quaint town of Cambados is the largest in surface and the fastest growing. Further south, along the east-west border with Portugal marked by the River Mino is the sub-zone O Rosal and runs inland as far as Tui. The last of the three original subzones is Condado de Tea in the west which stretches from Tui and runs up the Mino valley to meet the DO of Ribeiro.

The most important and most prestigious variety of grapes in the D.O. Rias Baixas is the Albarino grape. Other high quality grapes are the Treixadura, Loureira, Caino and Espadeiro. The Albarino wines made of 100% Albarino grape have received great recognition and success in both national and international wine markets, winning awards in various wine contests including the prestigious wine tasting of Bordeaux, France.

Albarino wine has a bright pale yellow colour with hints of gold and green. It has a floral fruity aroma with a pleasant aftertaste. The wine is fresh and smooth on the palate and is medium in intensity and medium to long in duration. The Rosal wines are made using at least 70% Albarino and Loureira varieties and sometimes with other varieties produced in the area. Condado wines are made using at least 70% Albarino and Treixadura grapes and other local varieties. These wines have personality’s characteristic of the Lourieira and Treixadura grape, respectively. They are more intense in colour than the 100% Albarino, with slightly more acidity and are fuller bodied, however these wines are also both pleasant and attractive to the aftertaste.

The Valdeorras D.O. appellation occupies a good part of the basin of the River Sil located in the eastern part of the province of Ourense. Ourense is the only province of Galicia without a coastline and with colder Galician winters and very hot summers.

The white wines are made using the Godello variety, which produces white wines with a delicate, fruity bouquet, with a straw-yellow colour with a hint of green. These wines tend to have an average alcohol content of 12.5 degrees proof. They are nicely structured with a natural acidity which makes them fresh and full rounded wines with a long and satisfying after taste.

The red wines are made with Mencia grapes. These wines have a deep cherry colour with violet hues. They are young in age and have a fruity aroma. They are gentle and full in flavour and are recognized as being amongst the best wines of today.

Situated in the south of Galicia on the north western border of Orense along the hillsides where the Mino, Avia and Arnoia Rivers meet we find the D.O. Ribeiro. Wines from this region have a long history dating back to the sixteenth century when standards of quality were already in place by the areas main town Ribadavia.

Wines from the area have both a fruity and floral aroma and delightfully surprise the palate. The wines are made from local grapes; Treixadura, Torrontes, Loureira, Caino, Brancellao, and Souson. The wine is said to have an incomparable personality.

The white Ribeiro is light fresh, dry and fruity, with a light colour, high level of acidity and alcohol level of between 9.5-13 degrees. These wines should be consumed in their first of second year. The red Ribeiro is dark red in colour with a well balanced acidity level. Its alcohol levels are between 9.5-12 degrees proof and like their white sister should be drunk young, preferably in their first year.

A more recently created denomination of origin, but historical wine area the Ribeira Sacra stretches along the shores of the Mino River and the Sil River, an area with an unforgettable landscape, full of history and monuments. The area lies in the south of the province of Lugo and north of Orense. The vineyards grow climbing along the canyon sides and are said to date back to Roman times. The area has five subzones; Amandi, Chantada, Quiroga-Bibei, Ribeiras do Mino and Ribeiras do Sil.

The Ribeira Sacra D.O. is mainly oriented towards the production of red wines; although a few interesting white wines are also produced. Mencia, is the most widely cultivated variety in the area. Mencia from the Ribeira Sacra is noted to be a clean, dry wine with strong flavours, and deep cherry red in colour.

The last wine area of Galicia is the Monterrei D.O. located in the eastern part of Orense along the border of Portugal. The vineyards are along the hillsides of the River Tamega. The climate in the area is dry with more a continental influence over the typical Galician Atlantic influence. The varieties of the area are Dona Branca, Verdello and Treixadura for whites and Mencia and Mari Ardona for reds.

The whites of the area come in with an average alcohol content of 12.5 degrees; they are light yellow in colour with golden hues. They are fresh in the mouth, with a fruity and slightly acidic tang to them. The reds have a very deep blackberry colour with a hint of violet. They have a powerful aroma and have a flavour of red fruits. They usually have lower alcohol content then the whites of the area but are known to be well balanced and fresh.